Peninsula Pizza Project Part II: The Method Behind The Madness 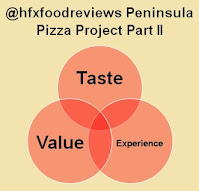 Over the summer and fall of 2020, we set out to try and find the best slice of pizza in town and unveiled the results of the @hfxfoodreviews Peninsula Pizza Project 2020 over at Eat This Town, the home of numerous epic local food quests. But, the conclusion of that initiative didn’t mean we were finished with pizza…

Slices are one thing, but heading out for a nice meal at a pizzeria is a different story. And trust us, there are some mighty fine pizzerias in Halifax. Of course, we couldn’t visit most of them for a while, thanks to COVID-19 pandemic-related shutdowns. However, one of the first places we visited when dine-in restrictions were first lifted in June was La Piazza. In fact, it was that evening that our idea for the whole Peninsula Pizza Project came to fruition.

We teamed up with Eat This Town again to unveil the results of the Peninsula Pizza Project Part II, which you can find here, but we wanted to provide some extra context through a post on our own site.

When considering what makes a good slice, we came up with the concept of the “Venn Diagram of Pizza” – most are either good, big or cheap. Occasionally, you’ll find one that’s two of the three. Then, we wondered: is there a slice of pizza in Halifax that is all three? (yes, one did!). With that being said, we felt that sit-down meals at pizzerias couldn’t be judged by the exact same criteria, so we modified our “Pizzagram” for Part II and focused on the taste, value, and overall experience (i.e. service, ambiance, presentation, etc).

Our parameters were as follows: 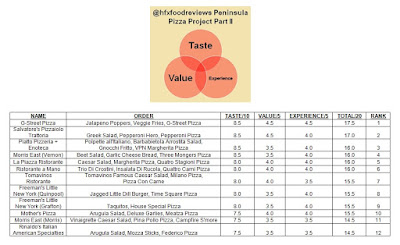 As you can see, some of the top scores were pretty close and, frankly, we were a little surprised by some of the results – a few fared far better than we’d expected, while others weren’t quite as good as we’d anticipated.

So, that’s how the @hfxfoodreviews Peninsula Pizza Project Part II worked. Thanks for following along – we can’t wait to tell you about what we try next! And, if you would like to suggest a great local restaurant you think we should try, email us at hfxfoodreviews (at) hotmail (dot) com, send us a Tweet, or post a comment below.

P.S. Here are the direct links to our Peninsula Pizza Project Part II reviews and photos, arranged by their final rankings:

Posted by hfxfoodreviews at 10:34 AM No comments:

Kofuku (Japanese/Thai, 2752 Robie), visited February 25. Situated in the former home of Mary’s Place (that underwent extensive renovations), Kofuku – which means “happiness” in Japanese –offers an invitingly quaint atmosphere, right down to the dishware. Although we were the lone dine-in customers during our visit, there was a steady stream of excited take-out clients, which was a good sign. We stopped by for one of their Dine Around Halifax specials, which included spring rolls, pan fried dumplings, cashew chicken and Pad Thai for 2 for just $30. We learned that everything on the menu is made with pride in house – even the soy sauce – and, simply put, it was all delicious. The starters were served quickly and piping hot, and both were great. Both mains were plentiful, fresh and packed with flavour. An absolute gem that surely won’t stay hidden for long! Verdict: 5/5 (100%) chance of returning. 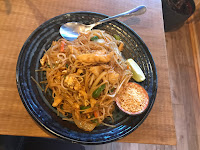 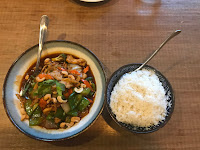 Chanoey’s Pasta (Pasta, 41 Portland), visited February 12. We’d never heard of this quick serve spot, but the Dine Around Halifax special looked intriguing, so we gave it a shot at lunch time. We were quickly served generous portions of meaty, and cheesy gnocchi ragu and creamy chicken pesto, with a couple of cans of drinks and cookies (that clearly didn’t skimp on the butter!) for $30. A great deal, we left happy, and we were full for the rest of the day. Verdict: 4.5/5 (90%) chance of returning. 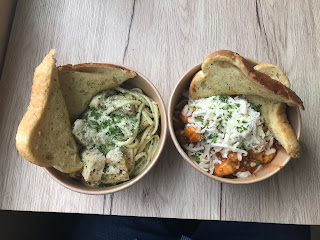 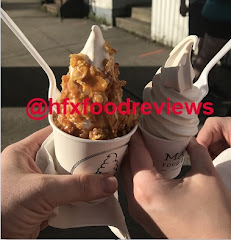